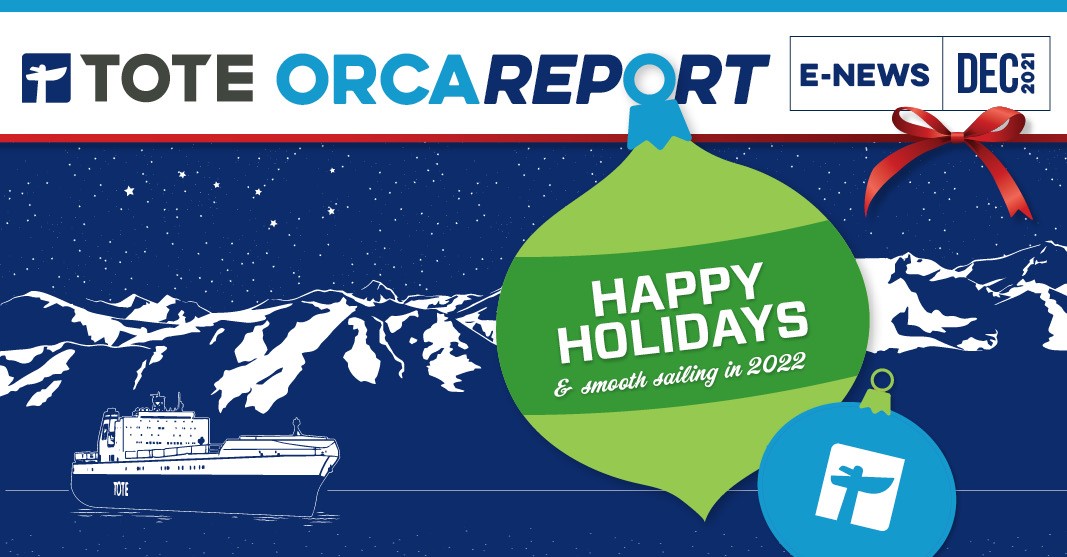 Thank you to our team, partners, and incredible customers for your partnership through a challenging but rewarding year. We are forever grateful for your ongoing support and commitment to serving the communities that rely on us. We hope everyone has a very Happy and Safe Holiday Season.

A Christmas Story at the Port

‘T was the night before “Ship Day”, and all through the port,

Not a worker was thinking their day would be short;

The trailers were parked in long rows with care,

In hopes that the North Star soon would be there;

The gatehouse was nestled all snug at the gate,

The ramps they were ready, the ship crew did wait.

Dispatch was geared up and ready to work,

Then, out on the Inlet there arose such a clatter,

Billy sprang from his desk to see what was the matter.

Away to the window, Jessica flew like a flash,

Then out through the doors, the duo did dash.

The moon on the water and the new-fallen snow

Gave the luster of mid-day to the water and so…

When what to the waiting duo should appear,

But a big blue ship pulling up to the pier.

With a little old captain, so lively and quick,

They hoped for a moment it might be St. Nick.

More rapid than eagles the longshore they came

And tied up the ship, and unloaded the same.

On Linehaul, On UFAT, On Weaver, On Trains!

While drivers hooked trailers and checked out their load,

And the trailer with holiday mail hits the road;

To Anchorage and Fairbanks the truckers they drive,

While customers patiently wait for their freight to arrive.

And then, in a twinkling, the unloading was done,

And Linehaul prepared for their long Fairbanks run;

Then as Billy pointed north, and looked out to the sound

Down the main ramp one last load came with a bound!

The loads were all ready, with no room to spare

Customers in Fairbanks were waiting for freight to get there!

Christmas trees and toys in a trailer for Sears,

Soda for Odom and even some beers.

And so…in a frenzy, the crew at the port

Surrounded the load and the facts they did sort,

What was this strange cargo, and where was it bound?

George inspected the load and Santa he found!

A man dressed in Red, from his head to his foot,

A bundle of toys he had flung on his back,

He looked like a peddler just opening his pack (does rates  know about this?)

His eyes—how they twinkled! His dimples how merry!

His droll little mouth was drawn up like a bow,

And the beard of his chin was a white as the snow.

The stump of a pipe he held tight in his teeth,

And the smoke of it encircled his head like a wreath;

He had a broad face and a little round belly,

That shook when laughed like a bowlful of jelly. (Good ship  cook!)

He was chubby and plump, a right jolly old elf, (Kully in  disguise?)

And dispatch laughed when they saw him, in spite of themselves

A wink of his eye and a twist of his head,

Soon let them know they had nothing to dread.

He spoke not a word, but went straight to his work,

And filled all the stockings; then turned with a jerk,

And laying his finger aside of his nose,

And giving a nod, up the main ramp he rose. (Does he need a  CDL to do this?)

He sprang to the deck, to the captain gave a Whistle,

And away they all sailed like the down of a thistle.

But as they heard him exclaim, as he sailed out of site,

HAPPY CHRISTMAS TO ALL, AND TO ALL A GOOD-NIGHT!’

We are very excited that the Midnight Sun has started the final phase of being converted to LNG. It has been a long journey to this point and the LNG Conversation Team has done an excellent job managing through the challenges along the way. The team reached a big milestone and successfully completed three (3) engine conversions (two for Midnight Sun and one for North Star)while underway this past spring/summer. They were also able to safely complete additional system installations and other riding work to prepare for the upcoming shipyard periods.

Midnight Sun arrived at the Victoria Shipyard on December 11th, 2021and will be there for eight (8) weeks to finish all the remaining shipyard work. The vessel will be back in service next February to complete final testing prior to the first LNG bunkering in March 2022. Once complete, North Star will go through the same shipyard evolution next year with the first LNG bunkering planned for in Q1 2023.

Another great development is the Puget LNG facility that has been built across the street from the TOTE terminal in Tacoma and will fuel the Orca vessels. The Washington Pollution Control Hearing Board granted PSE with the air permit last month and the final approval for Puget LNG to operate. The facility is currently on track to produce LNG this month and will be ready for the Orcas when they are ready.

Overall, the LNG Conversion Team and TMAK Single Sailing Team have done an excellent job this past year preparing us for the final phase of Midnight Sun. Thank you to all the customers and partners that have supported TOTE through this process. We are all very excited for this next chapter and hope you are too.

Meet Teddy Pease, Project Manager at TOTE Maritime Alaska. Teddy is a chef, foodie, and whiskey connoisseur, who has perfected the art of unique Alaskan cuisine.

Just in time for the Holidays, Teddy has just the meal for your next get-together. Click the images below for a downloadable recipe card and enjoy!

NEW LEADERSHIP AT THE HELM

Alex previously served as the Vice-President and Alaska General Manager and officially transitioned to his new role beginning November 30,2021.

“Alex has been the face of TOTE in Alaska, working closely with our customers, communities and others to help demonstrate our ongoing commitment to the Last Frontier,” said Tim Nolan, TOTE Group President and CEO.﻿

Thank you to each individual recognized this year for their outstanding service and dedication to TOTE.

Where are you shipping?

Thank you for your feedback!
Oops! Something went wrong while submitting the form.